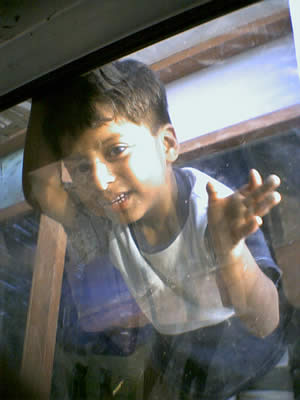 Here is Arturo. In this pic he is leaning from the window of his mother's restaurant (where they have no electricity but watch soap operas on tv every night using an old truck battery which they have to pay to have recharged) and pressing his head against the window of my van where I was working.

He is one of the smartest, happiest, most curious and most energetic kids I've ever met anywhere in the world. He was constantly talking, asking questions, investigating things, trying to do things. Nearly all the time I was with him, his mother was either a) ignoring him or b) yelling at him and telling him not to do whatever he was doing. I am sure that most professionals in countries like the USA would call this child "hyperactive" and say he has some kind of a disorder. No, he just has tremendous energy, curiosity and intelligence and a mother who is clueless on how to fill his emotional and intellectual needs, not to mention an equally deficient school system.

One time he was trying to open the back door of my van. His mother shouted at him to leave it alone. She didn't think he knew how to open it. She said two or three times, "No sabes, No sabes." You don't know how. You don't know how." But he kept trying. Then when he opened it as she was still shouting at him he laughed and said, "Si sé!¨¨¨Yes I know how!

Another time when I was constructing a cover to give my van shade, I asked him if he could help me. With a big smile he said "yes!" Then he was holding a pole to help keep the roof up. He shouted to his mother "Look mommy, I am helping!" She ignored him she didn't even look up from reading her paper. A few minutes later I asked him to hold another pole she happened to walk outside and see him with his hands on it. Not understanding, since she had ignored him the first time, she shouted, "Leave that alone!" I would guess he hears that at least 40 times per day. So he let go of the pole and just then a gust of wind came and the pole fell down and so did the part of the roof which it was holding up. I think then she understood that he had been helping me and she went back inside without saying anything.